Woke up early to some connectivity problems with the wi-fi. I guess I shouldn’t assume it will work everywhere. Decided to continue writing in the absence of the Internet.

More of the past distintegrates. The envy that used to hound me, the constant feeling of being “late”, the money worries…all that seems so faraway now. The sword, the spear and the scythe spake true…this IS the new world, even if I trouble believing it sometimes.

All the refutations and excuses that I used to go up and down with for hours on end. Why aren’t where I want to be in life at this moment? Well, it’s because I was abused. It all seems obvious to be now. What were once excuses and rationalizations turn into strength. What seemed like it was on Mars in the past now is so easy to do it’s almost frightening.

Why do I ever care about this time thing that goddamn much anyway? So I lost some time. Who doesn’t? I can take it on the chin and get on with life, as it were. There IS a point to mourning yesterday, but I think I’ve long since passed it.

It’s…complicated, as most things are. And also simple, as even more things are. Once again I’m putting aside the desire to go deep inside the mind, to figure things out, to explicate endlessly and write it out in a clear and conside manner – because these things are anything BUT clear and concise.

I went back to read a little of my previous writing. It wasn’t bad…raw in several places, but that’s only to be expected. I can feel the criticism inherent in it, and I remember how I would spend my time tearing myself to bits over every each line, instead of well…just writing!

I thought and rested and wrote in the dawn light, and it was good. Sometimes there is nothing more to say.

Not having Internet is a pain. No matter how much I like writing. Will eventually have to learn to get this blog thing set up properly as well.

D came down and I asked her to reset the router. And then like magic, it worked! Resetting things should always be your first port of call in the case of any technological malfunction.
Went out with my hosts and had a wonderful brunch at a nearby cafe. It was really really good. No pictures though.

Walked slowly back near through the river and saw a gaggle of geese who wanted food and a small snake, both of which I also did not take pictures of. Sometimes it’s good to just be with nature and not feel you have to capture it.

Had more wonderful and stimulating conversations with D about a variety of issues, including socioeconomics, human history and LGBT issues. She remarked and I agreed that this increased interest in LGBT and human sexuality seemed to have exploded in recent years – what was the cause?

Well, Ellen, for one. Caitlin Jenner, for another. And even way back, most probably Melissa Etheridge…Ricky Martin? One of the Wachoski brothers isn’t a Wachowski brother anymore. That’s just in popular culture. They’ve been signs that go back a ways, and not just in film and media either.

Which led to another interesting discussion about cycles and ebbs and flows in human society. Sometimes the signs are there but we can’t see them from where we are at the moment. That’s definitely been the case in my life. Hindsight is 20-20 applies to everything from country to county to our personal lives.

Makes you feel kind of small doesn’t it? In the grand scheme of things all our petty concerns like not being able to find the right kind of orange juice in the store seem paltry and insignificant. And yet each human life is precious, and our daily lives – no matter how small they may seem – all indeed have great meaning, if not to ourselves, but to the rest of the Universe as well. Everything is connected.

For so much of my life I was taught to put aside the small in favor of the large, and told also how my own struggles and sorrows meant nothing in the face of greater ones. It has taken me many many years to realize that those words were simply a false shield against great pain and sorrow that the speaker had no defense against.

Now it is a relief to realize that thought it may not seem like it at first, the simple act of putting on my shoes is also sacred, and that it should be attended to with the same spirit I give to prayer and well…everything else. That is a goal that may take some time to form in my life, but I believe it is one that is well worth aspiring to.

Mentioned that I like to cook and then suddenly in the matter of minutes it seems that I’ll be cooking for a party of 5 tomorrow. Bring it on! I volunteered anyway. We went out to buy groceries and I could actually find most of what I needed – this is California anyway, so their Asian selection is pretty good. Found a lot of the same stuff as I use in SG.

Went to a very nice open-air jazz concert which I do have one or two pictures of. Also ate tacos. Remembered that I didn’t much like tacos when I was younger but now I find them quite tasty. 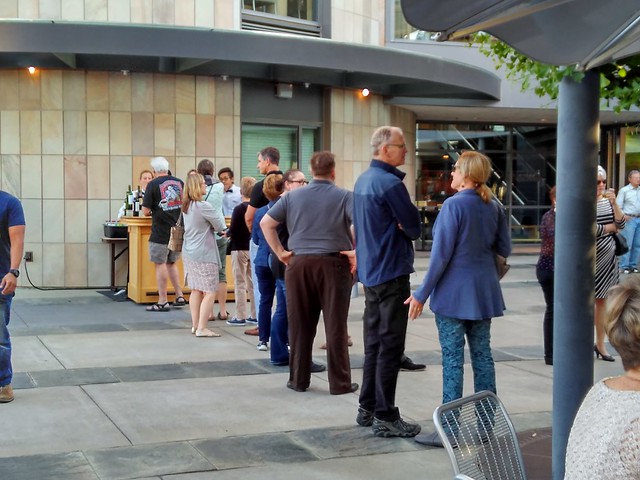 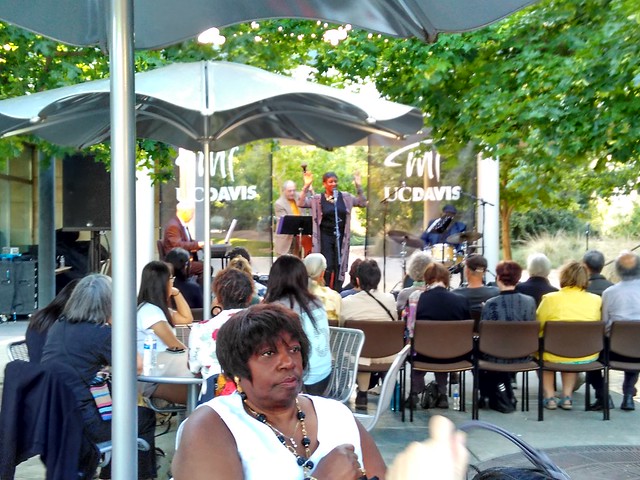 Was too far away to take good pics. 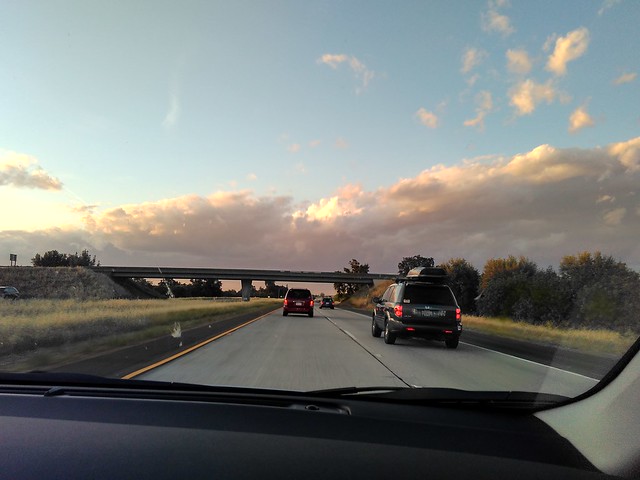 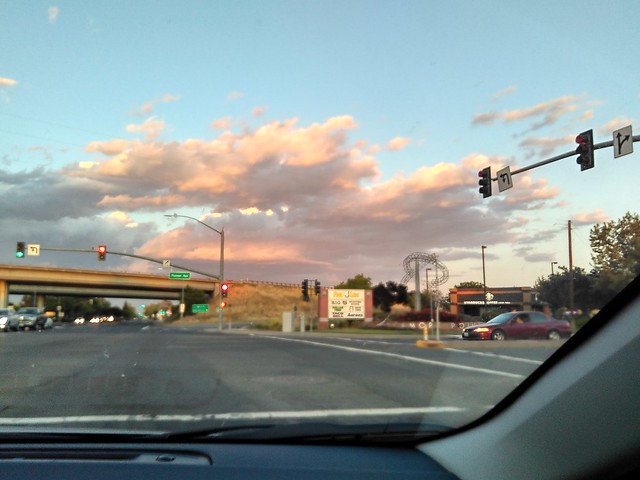 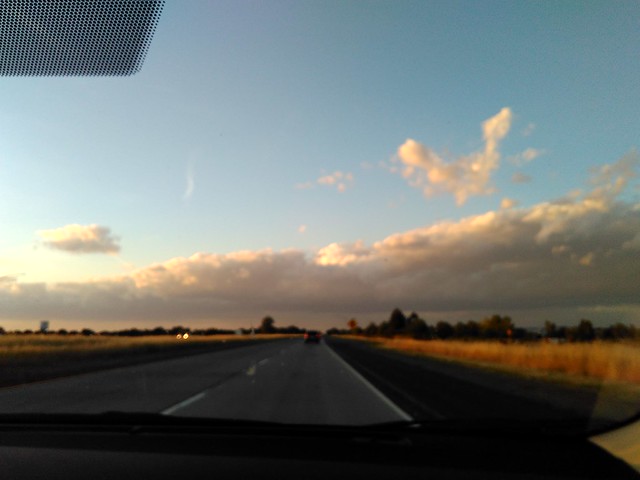 Completely had no time to watch Gundam Unicorn, but I’m sure I will have time later.

Thought about gardening either tomorrow or the day after. That’s something I have never done before and so it would be interesting to try! The seeds aren’t ready though, so all I could do at the moment would be to till the soil…very John Steinbeck.

Chatted more in the car, especially about my favorite subject these days – What I Am Going To Do With My Life. Though I’m also realizing that everyone that I meet doesn’t really have a clue either. It’s a process! And like a friend of mine said, we should enjoy the process.

I still feel kind of embarrassed at times for talking so much about myself. Though I do realize that that stems from a prior (and invalid) injunction to shut myself up in a hole and not bother anyone. Coming more to the slow realization that I’m a human being and that I have the right both to listen and to be heard, especially about really important issues such as what I’m going through right now.

I don’t think I ramble overlong but something inside always tells me so…shut up, past, I know you’re up to not good. Get yourself gone. These are my friends whom I love dearly, and who I’m sure are as happy to offer their perspectives and advice as I am to receive it. That belief grows stronger and stronger every day.

California is…still nostalgic, though not overwhelmingly so. I haven’t cried on this trip so far! I would be lying if I said that the scenery does not evoke powerful emotion though. If you asked me at this precise moment what I would do, it would be to go to university or work here. But that may just be the nostalgia talking. It’s too early to say.

Had another nice dinner. Also no pictures. This food picture taking thing has gone too far, and the buck stops here. So…much…good…food. The first leg of my trip seems to be a lot of a) talking to much older people b) spirituality and c) cooking. I wonder what the second will be?

More deep and philsophical conversations with my hosts, ranging from…well, everything, it seemed. Culture, society, human civilization etc. I’d love to relate all that we discussed but I have a schedule to keep!

D was very interested in the history of Singapore, which is actually very interesting indeed…and unknown to a great many people. The national rhetoric is that Singapore is 50 years ago, which is quite frankly untrue. It’s history goes back a full two hundred years and is filled with events that are beyond the scope of one blog post to address.
We had wine and chocolates to go with it, which were fantastic and also proved beyond a shadow of a doubt that I Was All Grown Up Now. 21 years before I would have found all that deadly boring (maybe not the chocolates) and went off to play video games or read a book.

For the first time in my life I broke off the philosophical discussions early so I could get some sleep…busy day tomorrow! More evidence of maturity, I guess. Also, the assurance that there will be more in the future helps. Moving from scarcity to abundance has many forms.

It has been a day of deep thought and reflection, and it is indeed a blessing to share it with others, instead of sitting in my room all alone thinking my heart and head out, which was never the healthiest of activities. For the longest of times all those parts of my nature remained separate – anime, spirituality, philosophy, psychology, social justice…I can see at least some connections being formed now. I don’t believe I could choose between any one of them, and I don’t think I need to.

How does it all fit together? I still don’t know. There is but the path, and the willingness to walk it.