Woke up early, but didn’t feel tired. That seems to be the normal state of affairs for me these days. It’s pretty amazing, I must say. I technically have a sleep deficit of about…6-7 hours at this point but technically smechnically.

Mindful of the injunction not to work too much on my vacation, I didn’t. There were still things to be done but…I did them. Yay. Less thought, more action.

What feels the weirdest is perhaps writing all these posts with little to no editing whatsoever. Yeah, what you see is what you get. I actually feel I write BETTER without the editing getting the way.

Took some pictures of the house in the early morning light. I always think that it gives everything a special glow. 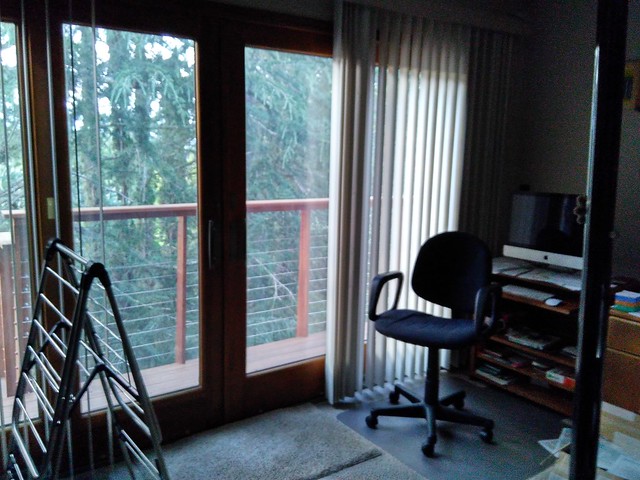 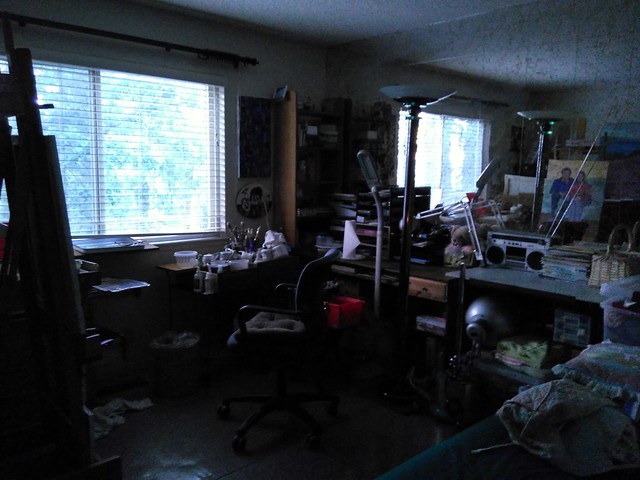 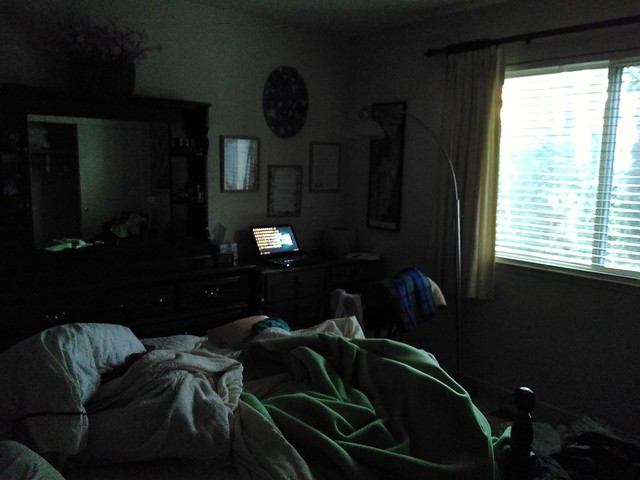 If you haven’t already noticed, A is quite the painter. 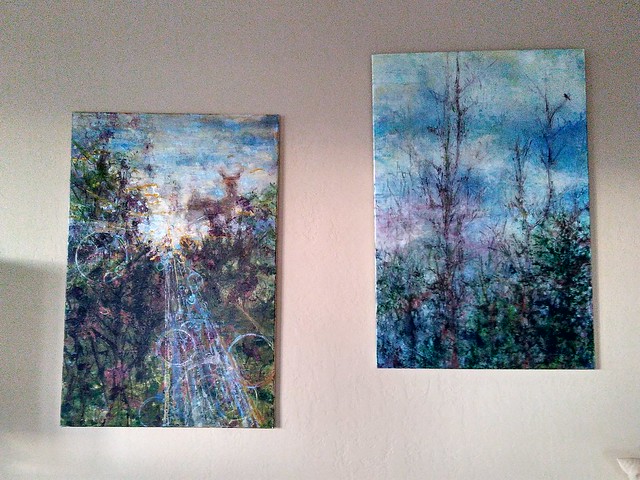 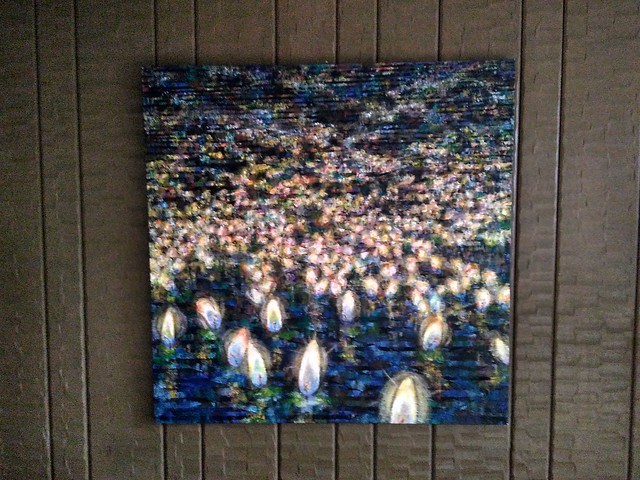 Got ready to go to UU service. Not memorial service, a normal church service. Like I said, this trip has very spiritual beginnings. Which is pretty cool. I always thought the next time I went to the US it would be for school or to attend a gaming event or something, but no, it’s service after service…I’m not complaining! It’s been very good for the soul. My first ever church service! I feel like a Real Boy now. Or something like that.

The speaker gave an incredibly good sermon which I will just put the YT link up to when it’s done. It was so good that I went up to him personally to thank him. Turns out this was his last sermon before he had to leave.

We spent the day touring the city with two au pairs, L (no relation to our favorite notebook writing psychopath) and S from Austria and Germany respectively. I had fun chatting with them. Once again I have to mention anime and our conversation turned in that direction.

What is it with young people and One Piece, Naruto, and Bleach? At least there was Dragonball. That shit never gets old. What was HE watching? Attack on Titan, which made sense because a) he’s young and b) it’s in German.

Talked a bit about Avatar the Last Airbender as well (I prefer Korra because well…she’s female. And hot.) and Game of Thrones, which I don’t watch. L then asked me what I DID watch? Not the contemporary stuff, that’s for sure. I mentioned EVA and Gundam Unicorn but those didn’t ring any bells. (I would have been VERY surprised if they did…)

S was a more reserved sort, but did join in at certain points. Must be the German blood…ok, ok, I’ll stop it with the racial stereotypes now.

It’s kind of strange being around young people, especially as I consider myself young as well. Despite not watching exactly the same things, I know what they are talking about. Like P said, it’s all relative. To people past 60 I guess ALL of us look young.

Also L despite his youthful skill with the mobile phone, STILL couldn’t fix it. Which just goes to show that Xiaomi is the tool of the Devil.

Oh yeah, and the title of the sermon was “Go to the Sea” And so I went. Beautiful isn’t it? I wish I could stay forever, or at least a little longer.

Went up to Twin Peaks. Incredible view huh? The wind was so intense that it threatened to sweep me off the top. I felt like I was in one of those kung-fu movies where the master is all like “young one, you must go to top of mountain and take many pictures while not fall off. Only when you post them to Instagram with no filter or lame captions can your training be considered complete.”

A cave in the middle of the cliffs that looks like it leads to another world :

Also went to the Castro District, where there are more gays than you can shake a stick at. I mean it, almost EVERYONE on the street was gay. This is SF after all. It’s nice that they have a place to hang out and be completely accepted. I wish I had that kind of place when I was younger, that’s for sure.

Had dim sum for lunch where I became the de facto translator for my group due my knowledge of Chinese. L and S were a bit ambivalent at first (first experience with Chinese food) but I think they enjoyed themselves in the end.

Somewhere before the trip I bit my lip and got a canker sore. I used to need copious amounts of medication for my canker sores but now they are going away all by themselves. I’m healing inside and out, it seems. My need for sleep also diminishes each day…which explains why I am up at 5 writing a blog post.

The last stop of the day? Another church, but non-UU this time. Still very beautiful. I am beginning to appreciate churches more and more.

Thanked the organ player for his beautiful music. It’s nice to be able to go up and say hi to people just like that. That may be the thing that I like best about the USA.

After a long day we bade farewell to our 2 young friends (relatively speaking!) and went to have dinner with other friends of P and A.

They had a really nice place – perhaps one of the nicest houses I have ever had the privilege of being invited to. Wonderful children. The wounded part of my mind and heart expected to feel the familiar pangs of envy clutch at my heart but…no, they weren’t there, the constant refrain of “why isn’t my life like this?” Which is a relief and a half.

There’s no point in wishing for what we can’t have. And I can accept that now. It’s just that in the past the grief got in the way. Things are still ok – they’re great, in fact. Something which I am still also coming to accept.

In the course of relating my life story (which thanks to my recent activities I have gotten down to 4 versions – short (less than a minute) longer (5 minutes) half an hour (for close friends) and Super Ultra Long (my autobiography) I mentioned my singing teacher. So of course everyone asked me to sing. I aim to please, so I sang Memories of Life, which has become my go-to piece performance piece because it’s actually in English.

It went over well. Noticed my hand trembling quite intensely. But now instead of suppressing it I just let it happen. It’s ok to be nervous while singing! It just shows how much I want to sing well. There’s also the fact that at this point singing has a therapeutic element to me. As the late great Maestro himself (I speak of Pavarotti of course) once said, being nervous just means that you care about the audience.

Our host (who is also an excellent cook) was a no-nonsense, warm and learned lady who left me with a benediction “may you find what you are looking for, and not just the people.” Thank you. I have a feeling that I will find it, in whatever shape it may take.

A bit of musing before bedtime. As we drove back to the house memories arose once again. I found myself thinking of my dear friends sitting right next to me, of my other American friends. They love their country, I’m sure, but not as I do. Do the long green signs and swaying grasses elicit quite the same reactions in them? I think not. The freeways that span road after road, the lone lights on the street corner…not quite Nighthawks, but close.

I will leave in a month or so, but to them this is home.  Will I come here? Live and settle as 10 years ago I so dearly wanted to? It is once again too premature to say. But the demon that wants to know at all costs, the part that equates decision with security, lessens its grip. Something in changing inside me every day, and without tears this time. It’s not like Japan where I was bawling my eyes out! I just have to keep on walking.

And time…always the question of time. 2 decades since I left. Anime of today and in the past. Old friends and new ones – both in age and duration. Everything I left behind and all that I am picking up again, in new and more beautiful ways. The masters of old say that time is an illusion and we can only live in the now. That is perhaps truer than I ever knew.

Some other pictures of the scenery that I like :

You’ll see a lot of “normal” photos here. A asked me why I was taking so many of them. I said I find normal scenery interesting and she replied with 普通の景色は面白くない (Normal scenery isn’t interesting at all) to which with all due respect I beg to differ. My response is more along the lines of 普通の景色には独特の魅力がある。(Normal scenery has a unique appeal.)

I seem to have forgotten to mention at this juncture that A is Japanese? She’s been married to P for 30 years and has lived in the States for that amount of time.

I had three really busy days! I leave them now and see what tomorrow brings. More blog posts, no doubt.

I’ve taken so many pictures that I actually want to display them in a gallery of some sort, but WordPress is proving harder to use than I thought. I’m going to do everything manually for now until I figure out something better.

Also, I doubt everyone can get every reference in my posts, but they are welcome to try. I’ll buy dinner for anyone who manages to do so WITHOUT THE HELP OF GOOGLE.